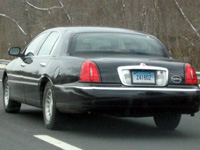 These plates are used on limousines, for-hire cars, and light buses licensed to operate interstate as livery vehicles.

I am not sure when this type started – I believe the mid- to- late 1930s- although originally Interstate plates were also issued to commercial trucks operating interstate.

In the 1940s and 1950s, similar to Bus plates there existed a “General Dist. Interstate” type – colors were the same as regular Interstate plates but had a single letter prefix before a 2-digit distinguishing number. An operator would receive plates with the same distinguishing number, while the letter prefix changed for each plate issued (e.g. A 30, B 30, C 30, etc.).

1941
The design of this plate is similar to Common Carrier plates of this era. It appears that after plate number 9999 they rolled over to an ‘A’123 format.

1979
Like many bus plates, frequent washings took off most of the blue paint after a while.

Another 1993
The numbering cutoff for the start of the ‘Z’ series isn’t clear – there are overlapping numbers between the two styles.

2005
The use of date stickers was discontinued with the 2008 expirations.