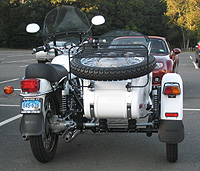 These plates are issued to motorcycles.

In 1912, state-issued plates were introduced. These looked very similar to passenger car plates, in color and format (including “C” prefix), though the size of the plate was smaller. This concept stayed the same through 1936. Plates of this style with reversed colors are sidecar plates. These were issued from 1916 through 1923.

While passenger car plates moved to a semi-permanent design in 1937, annual motorcycle issues remained through 1942. They were then revalidated with corner date tabs through 1954.

Annual plates were issued through 1961. After this, the plates were revalidated with passenger-type decals expiring in March, beginning with the 1963 expirations. There are very very few 1962 dated plates – these have a stamped date and were likely only issued to new registrants while all of the existing plates were transitioning from annual to two-year expirations.

In 1970, the “standard” motorcycle plate size was adopted and has been used since.

At this time an all-numeric series started at 10000, continuing into 6 digits a couple of years later. The 6-digit all-numeric format continued until the mid-2010s, well into the 900-000 series at which time a much more confusing numbering format was introduced – 00-AAAA.

Veteran and “Early American” motorcycle plates were introduced around 2000. See the Early American page for details of this type.

Finally, handicapped Motorcycle plates are issued as well – with 3 numbers followed by an -M& or -N& suffix.

1916
4 extra holes along the top, but still a decent affordable example of this type

1969
Plates were changed to blue on white for 1967. Two-letter prefixes were also used on this style of plate.

1972
The “CONN” legend used to be offset to allow space for the decal.
For some reason this was later centered and resulted in bolts through the decal.

Another 1976.
Why show this rusty plate here? It’s one of the highest numbers made on this style of plate.

1981
There was a short period of time where the dot was not used.

The dot was missing in the 425 series.

Early motorcycle vanity, on a steel plate, revalidated to 1999. The blue plates were always aluminum, this is an anomaly.

1990
When the “Map” base passenger car plates came out in 1987, the state name was moved to the top of those plates. The same move was made for motorcycle plates, though no map graphic was added. This took place between numbers 574-896 and 575-070.

2003
Older number remade on the new base.

Motorcycle plate with “60 Days” decal. These decals were also used on passenger car plates. I am told they had something to do with delinquent taxes, though I am not sure that is really the case. In any event, it is amusing to see these – the plate expires 60 days from when? From today, of course!

ca. 2020s in the current numbering format. This format is shared with Early American, Spec. Equip. and probably a few others. The letters change first: starting at 00-AAAA running through 00-ZZZZ, presumably followed by 01-AAAA through 01-ZZZZ, etc.