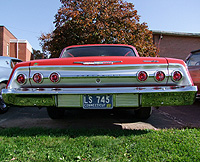 For 1957, new standard-sized 6″x12″ plates came into use. These were in the state colors of white on blue. Annual revalidation continued to be with date tabs. When these new plates were issued, most motorists could have their existing number re-made on these new plates. The exception to this was those whose registration had both a letter and number in the prefix, such as 9/N or A/2.

There are no dated 1961 passenger car plates. This is because instead of having all plates expire at the end of the calendar year, a staggered renewal system was instituted. At the end of 1960, motorists renewing their registrations received date tabs for May 1962 through February 1963. Reflective adhesive decals were used for later 1963 expirations. A system was used where the first letter of the owners last name determined the month of expiration. This practice continued until the late 1990s.

Sometime in late 1965 or 1966, the 2-letter 4-number format returned with the BJ- series. Tab slots no longer appeared on the plates. Since the C series is reserved for Combination and D for Used Dealer, after the B series finished numbering skipped to EA-1000.

In 1968, a new die style was introduced late in the FO- series. These were thinner and had a “crisper”, more standardized look.

No Dated Passenger plates this year
because of start of staggered
registration system.

1963 Tab plate.
Date tabs were only used for
Jan through March.
This particular plate was on a Ford Model T. I have the registration paperwork!

1965
The all-numeric series ended around this time.

1965
A letter combination undoubtedly not used any more.

1966
The 2-letter, 2-number series then picked up again, this time with a dot. This presumably happened in the BJ-series.

1966
Tab slots are now gone. After the B- series, numbering skipped to the E- series (C is for Combination, D is for Used Dealer).

1966
No tab slots on this plate; some older combinations such as this were reissued.

1968, with another reissued number.
No tab slots, no dot between letters and numbers.
I don’t know what the deal is with that huge ‘A’.

1968
The “Connecticut” legend got a little bit skinnier.

1969
The dies were changed somewhere late in the FO- series.