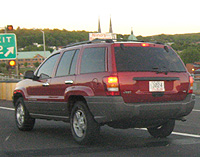 These plates are issued for temporary registrations – such as when purchasing a used vehicle or registering temporarily in order to have it inspected for permanent registration. Camp. Trailer, Camper, Commercial and Motorcycle are the types presently available for purchase. Combination and Commercial Trailer used to be issued as well.

Temporary Dealer and Repair plates are also issued, usually when a permanent plate has been lost.

These plates have holes punched in them for attachment in the same manner as a regular plate, however they often appear taped inside the rear windshield of the vehicle.

These plates are now valid for a period of 10 days.

Up until the early 1980s there were also metal temporary plates of similar design to regular Commercial, Dealer, Repair, etc. plates, with a ‘T’ suffix. These were typically used for vehicles whose plates were lost.

“In-Transit” plates of a similar design are issued, for purchases of a vehicle in Connecticut by an out-of-state owner.

Click the photo to see this type in use.

1988 Temporary Camp Trailer
Interesting that this plate doesn’t have the “Temp.” legend on it

1981 Temporary Commercial. Like temporary passenger plates at this time, the caption was reversed from ‘Temp. Comm.’ to ‘Comm. Temp.’ for a short while.

1987 Temp. Commercial
In 1987 the letter was bumped over and became full-sized.

1998 Temp. Motorcycle
A higher number, in the newer style, but expiring about a month earlier than the plate shown to the left.

1984 Temp. Commercial Trailer
It is odd to see this full legend – to distinguish it from Temp. Camp. Trailer?