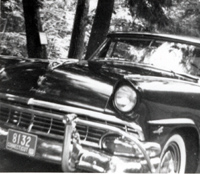 New base plates were issued starting with the ’48 expiration. These were reflective, with a yellow scotchlite coating. The prongs on the tabs were reversed from the previous series. Unfortunately, this material did not hold up well on the roads and flaked off the plates. Many of these plates are missing the reflectorization completely. The stencil-type date tabs were used to revalidate these plates through 1956.

In 1951, a new Scotchlite was introduced. This was a white/grey color, and was much more durable than the first attempt at reflectorization.

In 1955, bare aluminum plates were issued, with black painted letters and numbers. These used the narrow dies for the numeric digits, and a 2-letter stacked prefix- making 6-digit plates. The first iteration was on a dull-finish thick aluminum, with ‘CT’ as the state abbreviation in the lower right. These were used for the AA- through AC- series. Later in 1955, the state abbreviation was changed to ‘CONN’ and a shiny, polished aluminum. This started with the AD- series. The last variation of this plate used a thin aluminum, though the design didn’t change. These plates ran through the BB- series.

For 1957, new standard-sized 6×12 plates came into use. These were in the state colors of white on blue. Annual revalidation continued to be with date tabs. When these new plates were issued most motorists could have their existing number re-made on these new plates. The exception to this was those whose registration had both a letter and number in the prefix, such as 9/N or A/2.

1955
Once they exhausted the previous formats, four numbers were used with a stacked two-letter prefix. In 1955 bare thick aluminum plates were issued, maintaining the ‘CT’ legend in the corner. This is the 25th of these new plates issued.
This style was issued from AA- through AC-

1956.
Later in 1955 a change was made starting with the AD- series. The plates were now a polished aluminum plate with a ‘CONN’ legend in the lower right corner.

1956.
Later on a thinner aluminum was used in the same design. This style of plate was carried through the end of the BB- series.