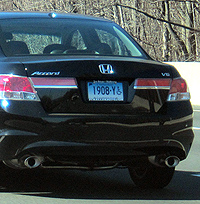 These plates are issued to vehicles used by disabled persons.

This type started in 1976, right after the Polyvend plates stopped production. For a little while, small decals with the ISA wheelchair logo were placed in the lower corner of the plate.

These were first issued with an -HP suffix. (Note that plates with an HP- prefix are NOT handicapped plates!). Around 1983 or 1984, a new design was started with a 100-A& format. These continued in this format until the general reissue in 2000, working their way through various alpha suffixes. With the new light blue plates, 4 digits were introduced in the -Z series. After reaching 9999-Z, they went back to the -Y series, but this time with 4 numbers instead of the previously used 3.

Handicapped Combination plates are also issued. First they were in the -C series, then -R, then -S, and now -T.

Finally, handicapped Motorcycle plates are issued as well – with 3 numbers followed by an -M& suffix. Once 999-M& was reached, the series went to 100-N&.

Mid-1980s used until the general reissue.

Reverse of this plate is unpainted instead of white.
It appears most or all of the plates in the ‘X’ series have unpainted backs.

ca. 1990s vanity.
Vanities are not too common

2006
After they reached 999-Z they kept going with another digit.
After the ‘Z’ series they worked backwards to ‘Y’.

ca. late 1980s Handicapped Motorcycle. These plates are very uncommon, so a sample will have to do. Actually, I think the sample plate is even harder to find than the real thing.
These are a few of these in a 100-A& format, the one above seems to be a more uncommon variety.

Another one, with two digits.