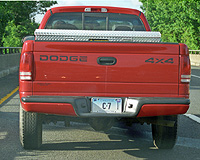 These plates are issued to to pickup trucks as well as all types of vehicles used for both business and private purposes with a Gross Vehicle Weight Rating up to 12,500 lbs. Up until October 1, 2005, the weight limit was 10,000 lbs.

In 1957, standard-size 6×12 plates were introduced for Combination plates. Until 1966, white on blue plates were issued for Combination, and these were distinguished from regular passenger plates by the serial having the first letter as ‘C’. In 1967, the colors were reversed to blue on white. New registrations continued on in the CA-1234 format.

Around 1969, the new smaller die set came into use, around the middle of the CB- series. In the mid-1970s, several changes were made. About halfway through the CO- series, the state name became centered between the lower bolt holes (no longer left justified). A smaller die set was used for the state name as well. This didn’t last too long, and with the CP- series, the ‘Combination’ legend was added between the upper bolt holes. This made the slogan-less CO- series tough to find.

Around 1980, CZ-9999 was finally reached. For a brief time following this it appears that older, unused numbers from the series were recycled. For example, a CN- series could have been re-issued. Finally, a brand new series was started and the numbering ran from C-10000 to C-99999.

The 100-‘C’AA series came next. In 1987 the map base was introduced. For a brief time just before the map plates were issued, numbers were issued in the old format of CA-1234 and CB-1234. These plates can be identified by the fact that they have reflectorized (glass-beaded) numbers, unlike the previous re-issue of this format around 1980. Numbering continued on with little fanfare until 1996 when 999-CZZ was reached. The 1’C’-0000 format was started. Breaking with tradition, lead zeroes were used after the dot separator, beginning at -0001 instead of -1000.

In late December of 1999, the reflective light blue base was introduced. The initial numbering format was 12345-C. The ‘Combination’ legend was dropped from the plates, replaced by a stacked ‘COMB’ to the right of the serial.

In mid-2014 9999-CZ was reached. It appears the DMV finally gave up on trying to fit the letter “C” in some form in the serial, because a new series was started at 1000-DA. These appear to have been issued until the -DF series.

Various sub-classifications of plates are issued in Combination – Amateur Radio, Handicapped, Preserve the Sound and New York Press to name a few.

Carry-over number revalidated to 1973.
This number is from the original Combination format.
Colors were reversed in 1966 for the 1967 expirations.

Carry-over number revalidated to 1976.
Notice that there are “Wide” and “Skinny” type Connecticut legends used on these plates.

Another carry-over number, revalidated to 1969

1966 base. The earliest plates in the CA- series on this base had the letters squashed together with no space, and a dot crammed in the middle like this. I have seen these through at least the CA-5000s. 6-character plates on the blue 1957 base did not have the dot.

Later in the CB-series the dies were changed; this took place around 1969 or so.

1976
While passenger cars received Polyvend plates for the mid-’70s, combination plates remained like this.

1977
About halfway through the CO- series, the layout was changed to this odd-looking style.

This style seems to have made it through the end of the CO- series.

The “Combination” legend was added with the CP-series.

Another 1981. The numbers on this plate ARE reflectorized.

1989
Sometime just before the map base came out, a whole bunch of old-format plates were issued. Most of these appear to be in the CA- series, but there are a few in the CB- series. These can be distinguished from the early 1980s remakes by the reflectorized glass beading on the numbers.

1993
I’m not sure why this plate has a December decal. It should be July.

1994
Real nice plate, too bad someone put the decal in the wrong place.

Near the end of the numbering format

1998 Preserve the Sound.
These plates now have the ‘COMB’ legend embossed on the plate, so they use the same blanks as passenger car plates.

Another 2000, with an uncommon decal variation

The odd-shaped one with no serial number is the less common one.

2000 Handicapped Combination.
These were issued with -R suffixes, then -S, now -T

4-digit all-numeric Combination plates were issued in the early 1930s. This isn’t a carry-over, but rather a vanity made to match a low-number passenger plate.

ca. 1986 plate used until the general reissue in 2000/2001. Like most other types, after renewing registration in 2000 or 2001, the motorist received a white on red ‘Replacement Sticker’ to place on the old plates for use while the new plates were being made with the same number.

2004 Preserve the Sound
At some point, the COMB legend was embossed in the center, rather than screened to the left.

Like most other types, starting in 2006 windshield stickers were used to validate these plates.
Also, this particular plate was made after Connecticut stopped using 3M reflective sheeting for the background and started using Avery.

ca. 2010
Note the sharp cutoff between the blue and white on the late Avery plates.

Back to 3M sheeting for the background.
However, this new 3M sheeting rapidly degraded; turning grey and eventually peeling.

Near the end of the numbering series.

Continuing through the D- series