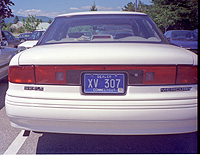 This type started in 1907. The plates were the reverse colors of passenger car plates and had a ‘D’ suffix from 1907 to 1916. Starting in 1917 an ‘X’ prefix was used and the plates were the same colors as regular passenger car plates. Eventually a second letter was used after the ‘X’. In 1932, stacked letters were used as a prefix. Sometime after this, the ‘D’ and ‘X’ series were split.

In 1942, the distinction was made between “New Dealer” and “Used Dealer” on the plates themselves. New Car Dealers used the ‘X’ prefix, and ‘D’ went to used dealers.

At this time, dealers would receive a “distinguishing number”, for example “X234”. The dealership would then receive plates XA 234, XB 234, XC 234 and so on. XQ- and XZ- are skipped, making the complete set 24 plates.

1957 saw the introduction of standard-sized 6×12 Dealer plates. ‘New’ and ‘Used’ were no longer spelled out on the plates; they are only distinguished by the first letter.

1913
Dealer plates started in 1907, in reverse colors of regular passenger car plates, and with a ‘D’ suffix.
This plate was issued to Edward Wetmore of Roxbury.

1915. This plate was issued to Hepburn Bros. on Bridge St. in New Milford

1922
This is probably as nice as you will ever find one of these plates – the paint is all original; the plate was never used.

1932
The Dealer legend became more specific in 1942, denoting whether the dealer sold New or Used vehicles.

1957
There are a couple of curious plates on the ’54-’56 base with a letter suffix after the numbers. For use at very large dealerships?