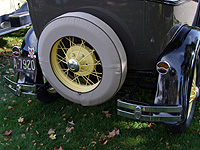 In 1932, smaller 6 x 9-1/4 plates came into use. Every passenger car plate was now the same size. Two stacked prefix letters followed by one to three numbers was now the standard format. Older all-numeric plates with one to four numbers, and those with single letters followed by one to three numbers were continued on these new plates. Colors changed every year through 1936. The top letter continued to indicate where in the state the plate was issued.

In 1937, motorists received new ‘permanent’ plates. The plates were made of a thick aluminum with black paint on the embossed areas. These were the same size and numbering format as the prior year’s plates, but had a space in the bottom center where a replaceable date tab indicating the year of validity was inserted. This date tab indicated the last 2 digits of the year of use, and the colors of this tab changed every year. The tabs were made of a thin, brittle metal, so that the mounting ears would break off if the tab was removed from the plate for reuse elsewhere. This plate was used for 10 years, through 1947.

1931 was the last year for these long plates.

1933
The ‘P’ in the prefix indicates
it was issued from the Hartford DMV Office.

This is an optional plate which was available to be displayed on the front of the vehicle for the year.