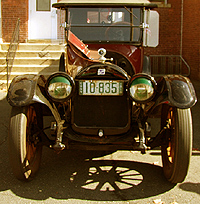 Beginning in July of 1903, Connecticut required motor vehicles to be registered. Upon payment of a $1 registration fee, a paper certificate was given to the vehicle owner with a number. The owner then was required to provide his own marker plate to display on the vehicle. Typically, these were leather plates with cast brass, aluminum, or zinc numbers tacked on. These plates were required to have a “C” prefix followed by the registration number.

In 1905, the law was revised. Each vehicle had to be re-registered at this time. However, the motorist was now issued a plate by the Secretary of State – the white on black plate shown below. These plates were rolled iron with a porcelain enamel finish – similar to your bathtub or stove. It is interesting to note that the number was specific to the motorist – so that if he owned three vehicles, they would all display the same number.

In 1907, more changes were made to the law. All vehicles again had to be re-registered. This was now an annual requirement – though the motorist was able to keep renewing the same registration number yearly. The plates continued in the same basic style, though the plates were slightly wider and the numbers spaced further apart. Sometime in late 1907 or early 1908, old numbers which had not been renewed were re-issued on new plates. At the very end of the series, a number of plates were made in a slightly different style – with a “block C” for the first letter, as opposed to the script style which had been used since 1905. These are extremely hard to find, and appear to be numbers greater than C9500. At most, 500 of these plates were produced and issued.

For 1910, a new style of plate was issued, in white on bright red. Plates and colors now changed every year. The state name abbreviation and year of use was added for the 1914 plates.

From 1917 through 1919, the plates were painted onto flat steel blanks, rather than baked porcelain enamel.

1906 (or 07). This is the style of plate issued from 1905-1909. There are markings on the back which indicate the date of manufacture, in this case 1906.
(Note: picture is out of scale with rest of the plates on this page). The registration was renewed every year, but the plate stayed the same. Although this plate was manufactured in 1906, it wasn’t issued until approx Jan 1907. This plate was a rear plate – front plates had slots for leather attachment straps.

In 1908, numbers which had fallen into disuse by 1907 were re-issued on new plates. These can usually be distinguished by a slightly larger plate size with more widely-spaced numbers. Re-issued numbers are typically below 6000 or so. The very latest plates in the series (ca. 1909) featured a “block C” prefix with block-style numbers. These are tough to find, and appear to have started with number C9500.

1913
Most of these larger plates were scanned in 2 parts, that’s why it looks like there’s a stripe like in the “6” here.

1917
Painted flat plate, dark blue on white. Somewhere in 1917 a change in material was made. I have a higher number plate which is on a heavy, thick metal base similar to the previous year’s porcelains; while the plate shown above is lighter, on a thinner material similar to 1918 and on.

1918
These flat plates were coated with varnish which yellowed.

1919 4-digit. The plate length and lettering style varied with the number.