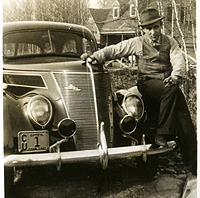 These plates are issued to to pickup trucks, as well as all types of vehicles used for both business and private purposes with a Gross Vehicle Weight Rating up to 12,500 lbs. Up until October 1, 2005, the weight limit was 10,000 lbs.

This type started in 1922, with the same size, colors and format as regular passenger plates but with a ‘C’ prefix. “Comb’n” was first spelled out in 1932. At this time, a stacked 2-letter prefix came into use.

In 1940 these plates took on the same look as regular passenger plates of the time, but always starting with a ‘C’ as the first letter. In 1946 and 1947, the same variations which passenger plates experienced were also applied to combination plates – i.e. some were issued on steel plates, and later brass base metal (in the C/2, C/3 and C/4 series) towards the end of the series.

In 1948, plates were reissued on the new reflective yellow scotchlite base. The reflectorization didn’t hold up well and around 1951 the white scotchlite was introduced. At the very end of this reflective white base the numbering format was expanded to C/A 1234. This lasted until 1955, when, like passenger plates, black on bare aluminum plates were issued.

See page 2 for the continuation of the history of this type.

Another 1947.
Near the end of the numbering series.

1947 Brass Plate.
Brass was used for a very short time, and there are not many Combination plates made on the brass base. Numbers appear to have been in the C/2, C/3 and C/4 series (Possibly also C/5). These plates did not hold up very well.

1950
This plate once had reflective yellow sheeting on the background.

1953
The changeover between yellow and white scotchlite apparently happened between the C/5 and C/7 series.