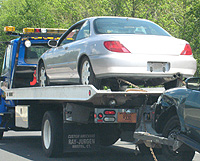 Starting I believe in 1967, decals were used to validate blue on white plates. This color scheme lasted until the early 2000s. At this time, Wrecker plates were re-issued in black on orange, still validated with decals. Along with Dealer and Repair plates, Wrecker is one of the few types to have fully-embossed captions and numbers. In my opinion, this is what made it one of the more “readable” types on the roads- no squinting to see a small legend screened on the bottom of a generic light blue plate.

As of Early 2016, wrecker plates are now in the universal AB-12345 format, which makes them much less readable.

In 1999, a new type was introduced – “Wrecker Vehicle In Tow”. See below for a description of this type.

1954
This may have been the first year for this type.

1974
These plates must have been made on leftover blanks, since it has tab slots – but Wrecker plates used stamped-dated annual issues well past the tab years.

1976 expiration.
Fitting number for the year.

1981
This is an older plate than the previous photo, yet has a higher number. Wrecker plates were issued with a hodgepodge of numbers during this timeframe – old numbers (and even plates!) were re-issued.

Late 1990s
Note the narrow “Wrecker” caption, which is different from all the others on this page. 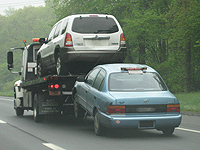 These plates feature the same serial number as that of the wrecker. Because there are so many words on these plates (along with the Connecticut state name on the bottom) the dies for the numbers appear to be those formerly used on Motorcycle plates. These plates were not widely used at first, but are becoming more common.

This type was introduced in 1999. According to state law, every vehicle with wheels in contact with the roadway must have a registration plate. This proved problematic for wreckers towing vehicles which were not registered- a “Dealer” or “Repair” plate needed to be used for this purpose. As Dealer and Repair plates are expensive, the towing industry asked for some way to get around this. Thus, the “Vehicle In Tow” type was introduced for this situation. The change in the law in 2010, however, rendered this point somewhat moot as all owners of tow trucks registered as wreckers must now also have Dealer or Repair plates.

Another one, in better condition

This plate uses different dies for the smaller lettering at the bottom.

The corresponding Wrecker plate for the “In Tow” plate at left.